Fourth-Generation Farmer Not Afraid to Get His Hands Dirty 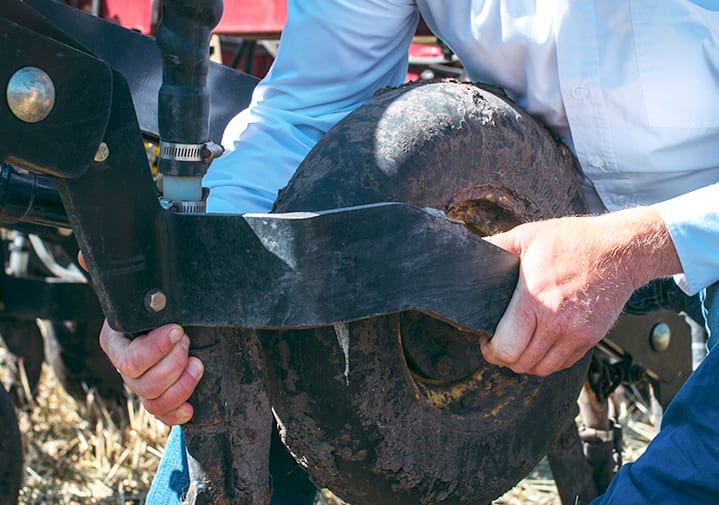 As the co-owner of a 15,000-acre farming operation in Wessington, South Dakota, B.J. McNeil can often be found in his office making strategic plans for the farm.

But like any good farmer, he’s no stranger to having his boots on the ground – even with six full-time employees.

“Often when something breaks down I’m the one that gets out there and helps diagnose and fix the problem,” he says. “I go around wherever problems are and put them out, get the guys going again.”

And when harvest time comes around, you will always find him out in the field.

“If you’re not in the combine, out in the field seeing why you got those yields, you’re not getting the whole story of what’s going on out there. It’s best to be there. That’s how I grade myself.”

A fourth-generation farmer, B.J. left a job in transportation in Dallas, Texas, in 1997 to help take over his grandpa’s farm after he passed away.

“That was always the dream but I didn’t know if it would ever happen,” he says.

The operation is almost entirely no-till, but McNeil won’t say 100 percent because he needs to maintain some flexibility in order to deal with the inconsistent weather that plagues east-central South Dakota.

“We’re either too wet or too dry in the spring. We never know which one it’s going to be. East of us they get a rain event every week and that covers a lot of mistakes. We don’t have that luxury.”

To deal with this, he does a bit of minimum-till, which he says makes a world of difference when it comes time to plant in the spring.

“If we’re really wet at least we have a little dirt on the top, a little blackness, a little sun to start drying stuff out,” he says. “On the flip side, if we are dry at least we’ve done very minimal disturbance out there – we probably still have 70 to 80 percent residue cover left on top of our soil, so it’s not like were turning it black.”

“I’m just playing the odds, which to me is better than doing nothing. It’s my happy medium.”

As a farmer now of more than 20 years, B.J. admits his attitudes towards farming and risk have changed.

“You always say you’re not going to be your dad, your grandfather, but somehow it always happens,” he laughs.

In light of this, he offers the following advice to today’s young farmers:

“If you’re going to fail, fail young. Take risks when you’re young. I’m almost 50 now and my sense of risk has changed dramatically from when I was 30 – you just don’t have as much to lose when you’re 30,” he says.

“Caution doesn’t get you very far. You’ve got to take risks and hopefully there’s a reward for it.”