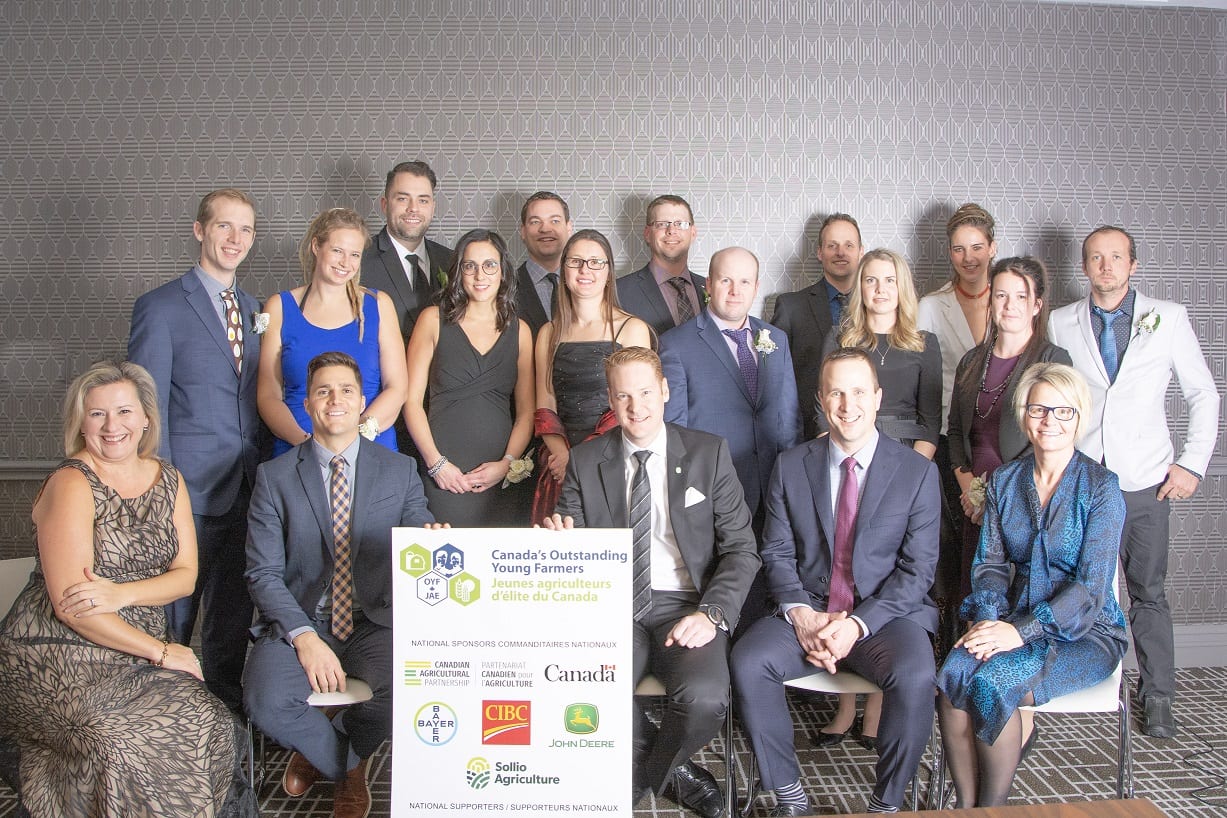 The two regional winners awarded with national recognition at the Outstanding Young Farmers 2019 annual event represent a variety of sectors in agriculture – from grain farming to dairy production, from beef cattle to forages and pedigreed seed. Both representatives focus on business excellence, environmental stewardship and on being active participants in the communities in which they live and work.

The National Recognition event brings together the seven regional finalists announced throughout the year. These finalists were chosen from nominees across Canada between 18 and 39 years of age who have exemplified excellence in their profession while fostering better urban-rural relations. The winners were chosen at the National event held on December 8, 2019 in Fredericton, New Brunswick.

OYF usually chooses two regional winners each year. While this year both winners were from the Eastern half of Canada, in eight of the last 10 years, at least one of the winners of the National competition has hailed from the West.

Simon Michaud and Mylène Bourque are managing their fifth-generation dairy farm, Ferme Régika Inc. in the heart of the tourist village of Kamouraska, two hours east of Quebec City. Their efforts to build their business and transition their milk production systems was not always easy but, following some struggles, they now run a full herd of 225 of mostly Holstein cows and have increased their milk production from 8,500 to 10,600 kg per cow.

“We did make a lot of changes last year with regard to animal health care,” says Simon. “We now have more stalls so we are looking to put more quota into our dairy barn. Through talking to other people within OYF, we are learning about different ideas that may be good for us; it is very helpful to hear what other people are doing.”

Because of their location in a tourist region, Simon and Mylène are also aware of the importance of maintaining a neat and attractive farm and homestead and making people aware of their sustainable farming practices. They are often invited to take part in discussions on the relationship between agriculture and tourism.

“Going forward we are looking to take over my uncle’s potato growing business,” says Simon. “This year with the grain – things weren’t great, but they weren’t terrible either. Even with early snow everything got harvested. With the dairy everything ran smoothly. It’s important to have different areas of your business with areas that work better some years than others.”

Generations of growth in PEI

Representing the Atlantic Region, Justin and Laura Rogers are owners of Picturesque Farms in Brae, PEI. They produce seed grain, commercial grain, corn and forages and raise beef cattle on 500 acres. In 2020, as part of the Dairy Farmers PEI New Entrant Program, they will be converting their beef business to a dairy operation.

Farming has been a part of Justin’s life for almost as long as he’s been alive. He bought his first calf when he was eight, purchased his first tractor at the age of 13 and, by 21, he had bought half of the family farm from his uncle. He met his wife Laura at college; they married in 2004 and, at that time, bought the rest of the farm from his parents.

Picturesque Farms is focused on their financial strength. They complete a business plan for all major projects and investments. Along with their pedigreed seed they added grain cleaning, custom seed treating, with a customer service focus on agronomics, seed genetics and crop planning.