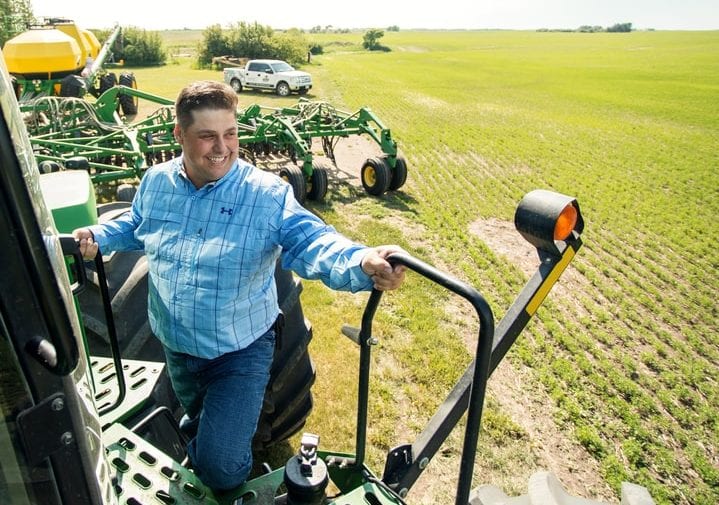 Dean Degelman’s farm in Odessa, a village in southeast Saskatchewan, has been in his family for six generations.

And in today’s increasingly challenging climate for small farm businesses in Canada, he feels extremely lucky to have had the opportunity to become part of the family farm operations approximately 20 years ago.

“Even when I started, the only way a person was able to get into farming was if you had someone to help you get started,” he says. “These days no one can afford to say ‘I’m going to be a farmer’ and just start farming.”

This opportunity was especially fortunate for Dean as he knew growing up that farming was the only thing he wanted to do.

“School wasn’t really the interest,” he laughs. “If there was a chance to help on the farm, I’d miss school.”

Now Dean and his wife, Cindy, run a mixed cattle and grain operation in partnership with his parents, and he loves farming despite the constant uncertainties.

Some of those uncertainties are related to weather and growing conditions – this year was particularly dry and the past couple years have seen wetter cycles – while some are more related to the current climate for small farm operations and businesses in Canada.

“It is a concern what today’s land rent and purchase prices are,” he says. “In our area, land and land rent prices are getting quite high. There are other areas in southeast Saskatchewan that are close to half of what they are here.”

Another concern of his is the rising cost of interest and proposed changes to federal tax regulations for Canadian farms.

“You always hear your parents talk about the early ‘80s when interest and land values went really high and there were a lot of farmers who got themselves in trouble back then,” he says. “That’s always in the back of my mind. I don’t want to sound too pessimistic, but I think we’re going to have some tough times ahead in a short period of time.”

In light of this, he warns younger farmers to be cautious as they are starting out to not to take on too much, too fast.

In spite of his concerns, he is hopeful that one day his own kids will take over the family farm.

Both his sons have expressed interest in farming and his oldest son Evan, 14, is a natural.

“I’m sure he’ll be a farmer,” Dean says. “He runs equipment, he has a good head on him and he’s very good at helping.”

His second son Austin, 11, has also expressed an interest in farming, although slightly less focused. “One day he’s a farmer, one day he’s a doctor,” Dean laughs.

Even three-year-old Georgina says she wants to be a farmer. “She likes the animals.”

In fact, the idea of a seventh generation of Degelmans operating the family farm fills Dean with optimism even in the face of the uncertainties that lay ahead for small businesses.

“The wonderful thing nowadays, especially with the way things are going, is still being able to give opportunities for your kids to farm,” he says. “At least when you’re working so hard, those long days, you know it’s going to be worth it at the end if someone wants to take over what you’ve been building your whole life.”