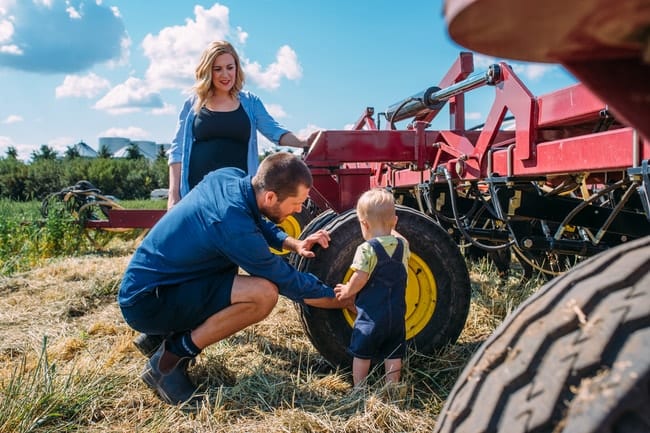 For this month’s edition of Seed Smarts, we spoke with Josh Lade to learn more about his cross-continental farming experiences.

Many prairie farmers grew up on family farms and instinctively knew that’s where they belonged.

But for Josh Lade, the journey to finding himself on a grain farm in the heart of the Canadian prairies was a little longer. Approximately 14,000 kilometers to be exact.

After growing up on a mixed farm in southern Australia and completing a post-graduate education in agronomy, Josh came to Saskatchewan in 2009 on a working holiday.

“I really just wanted to experience grain farming on the other side of the world,” he says.

Now, eight years later, he and his Canadian wife are raising a one-and-a-half-year-old son in Warman, Saskatchewan, not far from the 12,000-acre grain operation he co-manages with members of a local family.

And while he occasionally misses the warm beaches of southern Australia, he now considers Saskatchewan his home.

“I like the prairies and the wide-open fields,” he says. “I’m also a real machine nut – I love driving big equipment.” (Josh uses Seed Hawk drills fitted with Dutch openers.)

This equipment is one of the key differences he notices between Australian and Canadian farming practices. Because the Canadian grain growing season is so much shorter – three months, compared to Australia’s five to six months – there is a greater reliance on equipment and timely operations here, he says.

“All the crops are exactly the same but the timeliness of operations is just so critical. For example, with things like seed placement you need everything to be perfectly spaced and even coming up, and you’ve got no room for error.”

Another big difference he notices between the two countries is that Australian farmers are more advanced in their battle against weed resistance complications. For example, several farms in Australia have moved towards management practices including narrow row spacing, moldboard plow and harvest weed seed control. Because of his agronomy background, this is an area of particular interest to Josh.

“I like the paired row approach,” he says. “You can still have a wider row spacing, maybe twelve inches, but you can have a two-to-three-inch spread and it’s way better for weed competition.”

Josh has led some conversations with local farmers about weed resistance issues over the past couple years, sharing insights and management best practices from his time in Australia. He believes this will become an increasingly important topic in coming years.

“The writing is on the wall – it’s going to happen here,” he says. “But if we can do a few different things maybe we can prolong the resistance issue. We’re not going to stop it, but we can buy ourselves some time. It would be a mistake for us if we didn’t act on it now.”